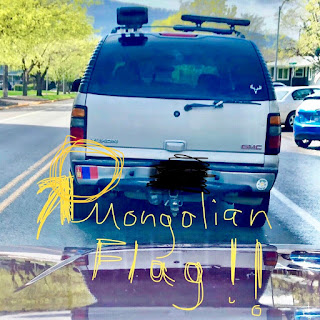 About a month before I was scheduled to leave, I was packing up my apartment in Missoula, MT and preparing to say a final goodbye to the kids I'd taken care of at a daycare for the last year and a half. My drive there took me past my old campus, and suddenly the creepiest thing happened to me: the jeep in front of me had a Mongolian flag stuck to its bumper! In four years of living in the most diverse city in Montana I'd never met anyone from Mongolia, or even a single person who'd traveled there! What was Montana Jo with a deer skull sticker on their back-hatch doing with a  bumper sticker of the Mongolian flag? And right in front of me, the day before I was leaving to spend the rest of May with my family before I flew to Mongolia? I was pretty freaked out for the rest of the day, as you can imagine. At least the car didn't crash! That would've been a real scary sign!

After leaving Missoula for the family farm in Toole county, I prepared myself for travel; I packed and repacked, then repacked some more! I made sure to get wood-chopping lessons from grandpa in caseI wound up somewhere I'd need to split my own wood. I watched my niece get baptised; I spent one last dinner with my best friend and her fiance, along with the three cats that had showed up at their house over the last few years! I said bye to my family and got a surprise going-away party!


Although I didn't arrive in Mongolia until June 5th, June 3rd was really the day when things became new to me. I had traveled before then; my old high school worked with EF Tours, arranging low-cost tours for interested students and chaperones during summers. So I was lucky enough to go to Australia when I was 16, and Costa Rica when I was 17. Before that, the most foreign place I'd been to was Tijuana with my mom, aunt and teenage cousin when I was nine. I think someone in the family had won tickets or something to disneyland but wasn't interested, so we got ourselves a sweet deal! Why not bus down to Tijuana with a 3rd grader in tow? I completed seven whole weeks of archaeology school in British Columbia (shoutout to Bridge River!) and in Vancouver I ate at a sushi restaurant for the first time!

I'd lived my whole life in the same county I was born in, and farming is what my parents and most of my relatives do. In a state where there's more cows than people, traveling can be a big thing. I had the privilege of attending one of Montana's best universities, only a four hour drive from mom and dad!
So, when I stepped off of the airplane into Portland, OR with two years worth of luggage, I felt so relieved to find other Peace Corps trainees there! Leaving the terminal was another experience; would we split into cabs, or try to fit into an uber? Next thing I knew, I was using uber for the first time! Later, when it was time for dinner, I followed the other PCTs (Peace Corps trainees) to Chipotle, which I had also never tried before, even though one had recently opened in Missoula. I didn't know they served beer there! Nobody could imagine how I'd never been to Chipotle before! 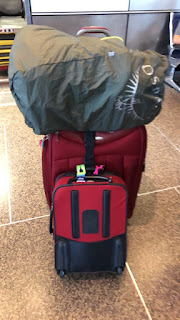 After a restful night, we all loaded onto two buses at the crack of dawn, and off to Seattle-Tacoma Airport we went. Up until this point we'd been supervised by our training managers, directors and local PC staff, but once inside that airport, we were bid goodbye and told good luck; resiliency and our ability to fend for ourselves was to begin right then!

And so a herd of roughly 50 or more people, all of whom were packing two years worth of baggage, lined up at Korean Air, during which some frantic rearranging of carry-on items took place, as we learned that our carry-ons would also be weighed; anything more than 15 lbs (I think) would cost a $100.00. I prepared my wallet, convinced my mom's red wheeled suitcase was at least 18 lbs, but no, 14.5 it was! Wew! Our next stop was in South Korea, where a brief layover allowed us to wander the pristine halls of Incheon Airport. As I've mentioned in a previous post, Peace Corps expects us to dress well, and we'd been instructed to arrive in Mongolia wearing our business casuals. So off to the bathrooms we went, which were the whitest, brightest facilities I've ever used! Not long after we all boarded the flight to Ulaanbaatar (spelled Ulan Bator on many English maps)!

In the middle of the night we touched down at Chinggis Khaan Airport. We were informed that we would be staying our first week in country at the Chinggis Khaan Khuree ger camp! To be honest the first thing I noticed about Mongolia as I stepped off the plan was the strong smell of either Ulaanbaatar's infamously polluted air or the bodies of all 50 million sheep in the country. A much lighter hint of this smell would make itself known to me throughout my first months here. I could smell it on the dishes I was eating out of, even. In Montana we have cattle everywhere, and the smell of all things bovine is nothing new to me, but more than a few sheep have passed my way and they smell very different from cows.  By the end of my training though, I realised I'd become used to it.When you're used to the smell of livestock, It's kind of comforting to be surrounded by it when you're thousands of miles from home!